Modern day shoppers have become more aware of their power of choice and are exercising it more than ever before. The African shopper is no different. Like shoppers everywhere else, Africans these days have realized how to use online tools to get that ultimate bargain, and this new awareness is sure to increase in years to come.

The Zero Moment Of Truth (or ZMOT) is the very contrivance that can be used to keep up with this new viewpoint of the modern day shopper, as it was shaped through the conscious observation of consumer behavior as it is affected by modern day inventions.


Studies show that shoppers do a lot of online research and spend a bit more time browsing for answers before they make a purchase. Agreed, these studies were not done in Africa, as some would love to argue, but we should consider that Africa has always consistently consumed the same civil material, and followed in the same patterns as the occidental world.

In terms of technology, academic structures, information and entertainment consumption, sports and fashion, it is clear that we have a tendency to order from the same menu as is done by our western counterpart. Only with very slight African variations if any at all. And make no mistake, this makes perfect sense as we were all first one single human race before we began to differ in appearance and our own different cultural self-stylings.

But please allow me to return to do a brief background to the concept:
The zero moment of truth is a marketing principle that is based upon the 3-Step Mental Model of Marketing which was introduced by Procter & Gamble sometime around 2003 or thereabouts. In that 3-step model it was found that a shopper experiences a Stimulus stage, a Shelf stage and the Experience stage. These shelf & experience stages are known as the two different moments of truth in the shopping experience with a given product. Moment of truth implying that the shopper realized he had to make a decision. However, more recently, and thanks to more effective technologies in data collection, researches carried out by Google and other participants have discovered there is a 4th and more important step in the current mental model.

Now since I had actually majored in Advertising at the University of Lagos, I would be the first to admit that while the stimulus that an individual gets from a commercial or magazine advertisement may be sufficient to leave a favorable suggestion of that product in his memory, it is ultimately not enough to ensure that he picks that same product when he gets to the store and sees the product stand next to several other competing products on the shelf. At this point several other things immediately come to play in his mind and he has to make a decision. The decision he makes would be based on several other factors (mostly psychological) that hope to justify why he is about to spend his money. The shelf automatically becomes a place where some clever form of additional advertising or promotion could seriously affect the shopper’s decision. This shelf stage is known as theFMOT, or the First Moment Of Truth.

The Second Moment Of Truth (or SMOT) is the 3rd part of the Procter & Gamble inspired mental model, and it describes the stage where the shopper (now buyer) has made his decision and has spent his money on the product. The product now needs to deliver on its promises. Now if the buyer uses the product and is satisfied with it or is delighted with it, then there is a strong likelihood that that buyer would not only be inclined to stick to that product, but he may even also opt to volunteer favorable reviews for the product. And in this wired era, that could mean sharing those reviews on his Facebook, Google+ or even blog. The problem is that such voluntary reviews could also be the opposite of favorable if the buyer felt that the product was awful. So since SMOT is powerful enough to influence the next shopper, perhaps the best way to promote your product at that stage is to make sure it is of good quality. J 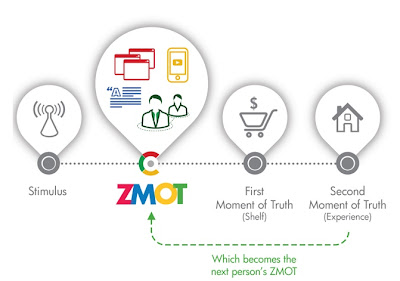 Now how does ZMOT fit into all of these?
Maybe the right question should be, where!
Again, research shows that a full 70% of Americans now say they look at product reviews before making a purchase? And again, I will insist that there is no reason why we should doubt a similar behavior increasing among Africans. In fact, I am convinced that these numbers will definitely increase (in Africa & in the US) in the near future, since the technologies and arenas to publish these reviews are themselves increasing and getting more and more popular. For example, on Facebook I am served daily with a growing list of movies to rate. And I enjoy doing this because it is so easy and it sometimes gets the attention and amusement of some of my friends on the social network.

So the 3step model has now clearly become the 4step model, and ZMOT has clearly become that place where the shopper goes before he goes to the shelf (FMOT). It is the place where they pay attention to a conversation about the product and ask their own personalized questions. It’s not just about being exposed to advertising stimulus. The zero moment of truth is that place where the most important issues are raised before the decision is made on purchasing the product. It is that place where an office manager is sitting at his desk and comparing the price of laser printers and ink cartridges before heading off to the supply store. It is that place where a student is checking out ratings and reviews while looking for a cheap hotel in Johannesburg. It is even that young girl who had gotten to the beauty shop to buy a bottle of designer perfume, but suddenly decides to take a picture of another bottle to send to her friend in Kenya to ask her what she thinks about it. She even decided to check the reviews at Frangrance.Net while she waited for her friend’s trusted opinion.

The bottom line is that additional contextual promotion carefully inserted by the producer of the product, could go a long way in influencing the decision at this stage. At this ZMOT stage, it is imperative that the smart brands join in the conversations that the shopper is paying close attention to. In some cases, the mere knowledge of the fact that you are present and listening to your potential customer is sometimes enough to nudge his decision compass. In other cases, it could present the basis for future conversations. The agility of your brand in learning how best to engage in these crucial conversations will be critical to future market domination. The dexterity of your product to conform to the true needs of its market will also depend on how well you are listening at the ZMOT. And this is sure for Africa as well.

The truth is that it is not certain just how much more this ZMOT stage will affect the future of shopping in Africa. But one thing is certain, shoppers will continue to shop digitally, and they will continue to seek reviews and pay attention to their influencers at the ZMOT. It’s up to you to decide where you want to join the conversation. At the beginning….or at the end!
at September 18, 2013